Another New Year, another slew of ‘New Year, New You’ dieting articles. Belts tighten and, all over the UK, thousands of people write up their 2020 resolutions and pledge to shed more pounds and go easy on the calories. To Quaker Lucy Aphramor, who uses the pronouns them/they/their, it’s a scenario they have seen often over decades of working as a dietician – and to limited effect.

‘I started off working as a community dietician in Coventry,’ they tell me, as they sip their latte in the Friends House cafe in London. ‘Most of the people who came to see me were white working-class women who had been told to lose weight by the doctor, and what I realised pretty soon on was that what I was doing – what I had been taught to do – wasn’t helpful. Often, it just didn’t work: people weren’t losing weight and no one was any happier. It just didn’t make sense for me. Also, the amount of fat-shaming that people were [experiencing] – there were a few times when people burst into tears by the end of the consultation because I hadn’t been horrible to them, and they were telling me stories of what it had been like, all the weighing and so on.’

Lucy’s light-bulb moment came however after a meeting in which their colleagues discussed the high rates of heart disease in local South Asian men. ‘Typically, across the UK, South Asian people have got much higher rates of heart disease compared to the general population,’ they explain, ‘so you can imagine what we talked about – ghee, smoking, et cetera. I started to ask myself what, apart from the weather, had changed for a person who’d moved from Mumbai to Coventry? Surely racism,’ they say. ‘But there was no mention of it; no way of bringing that into the conversation. So I went to a clinical database and Googled “racism and heart disease”, and that got me some hits, and that completely changed the trajectory of my work.’

From that point on, Lucy decided that they were no longer going to try to ‘correct people’s weight’ but instead embarked on a way of working that would allow for the complex and often hidden histories and stories of their clients to enter into their practice. Their programme ‘Well Now’ took years to evolve, with its philosophy of ‘connected eating’, but neatly dovetails with their Quaker values – which is all the more strange considering that they weren’t even a Friend when they first began.

‘I knew that I wanted to do my practice differently,’ they say, ‘but I didn’t know what that would look or feel like.’

With the help of their brother, who is a business coach, they set about dreaming up a business plan and mission statement, until, after days of fruitless, uninspiring form-filling, the dietician-cum-poet had another eureka moment. ‘I rang up my brother and said: “I’ve sorted it. My plan is ‘keep the faith’ and my mission: ‘do love’s work’.” The fact that it was a completely spiritual vocabulary completely passed me by.’

Nowadays, the spiritual dimension is firmly embedded in their work, nourished and supported by their Quakerism, which started with an involvement in the LGBTQ community. As a spoken-word poet and dietician, they try to unpick the complex strands of power and privilege that influence health outcomes, which chimes well with Yearly Meeting’s recent focus on unconscious bias and privilege.

‘My point of entry is food and body stories to doing love’s work,’ they say. ‘“Well Now” envisions a world where no one is starved of food, company, dignity and security.’

Crucial to their way of working is to recognise and transmute the traumas that may lie behind ‘our food and body stories’, which they believe the current conventional ‘reductive’ system of healthcare completely misses.

‘You could have a brilliant, brilliant healthcare service and that would be fantastic, but it would still not make a difference to health inequalities. Health resides in the relationships that we build on a day-to-day basis, which then of course influence healthcare provision… It’s delusional, totally delusional, to think that if the whole of England would eat just according to government guidelines that we’d get rid of health inequalities, or then we’d see significant reduction in heart disease. We need to tackle trauma, and that’s one thing I’ve noticed in Quakers – I think we need more awareness of trauma in Quaker narratives. I think that we need to recognise that what we call nutrition-sensitive diseases – things like diabetes, heart disease, strokes – they are nutrition-sensitive, but calling them that keeps the framing in “personal responsibility”. Anything that is nutritionally sensitive like that is also power-related.’

Instead, their ‘connected eating’ approach starts with the idea that ‘if somebody is really struggling with eating and there’s a lot of distress, the first thing is to help people know “you are worthy of love and respect, whatever you eat or don’t eat, whether you come and see me again”. Because so much of the struggle and suffering comes from shame, somewhere along the line they have linked the performance of health to “if I eat this food, I am a good person”, which is often very strongly related to morality around body size (to be thin is to be disciplined, et cetera).’

The second aspect to ‘connected eating’ they say is ‘helping people make sense of body signals and use them as data’. This differs from mindful, intuitive eating they insist as the latter believes ‘body signals are inherently a wholesome guide for action, which, actually, completely miss trauma. The strongest body signal you might have is to self harm,’ they elaborate, ‘and also if you have grown up not knowing where your next meal is coming from, your body signal will be to eat everything in front of you. I’m not dismissing body signals, but we are always in relationship, and body signals develop from relationship.’

There are other ways that the self-described ‘radical dietician’ breaks with conventional healthcare systems. As well as being vocally critical of the ‘Obesity causes cancer’ campaign (which they brand ‘misleading’), they have strong words on what they dub the ‘Thatcherite’ focus on the importance of Body Mass Index (BMI) in assessing health: ‘You put me on the scales, you measure me, and you know my BMI. You don’t know if I’ve been abused; you don’t know if I’ve crossed the ocean and seen my children die; you don’t know if I can afford to feed my children or not; so it completely closes down the imagination and becomes a narrative of shame and blame, and also one of superiority for those of us who are born into more advantageous circumstances and who haven’t come from a whole intergenerational history of struggle. Of course we’ve got different health outcomes. It’s not rocket science.’

Besides, they say, the idea that ‘if everyone ate the same and was given the same opportunity to do the same amount of exercise, our BMI would fall within that which is recommended… is simply not bourne out by the empirical evidence. People come in all different shapes and sizes’.

It’s heady, insightful stuff and after spending a short time with Lucy, I start to get a sense of why Quakerism must have helped keep them grounded and clear since they joined. ‘It’s helped me massively,’ they agree, not least in connecting to other Friends, both here and overseas, some of whom have helped host performances, most notably at the Edinburgh Fringe where they performed for two weeks in a row. ‘I’ve been so alone in my work,’ they say. ‘It was in a Quaker Meeting that for the first time ever, I felt held professionally.’ They like the fact that Quakers value ‘intellectual rigor’, saying: ‘There’s an expectation that there will be people in the Society who know what I am trying to say. Also, I like the openness, the lineage, the belongingness.’

Lucy Aphramor first joined Quakers after attending Yearly Meeting, which they were invited to by the Quaker Gender and Sexual Diversity Community.

‘I just knew that this is where I wanted to be,’ they say. ‘There was an energy to it, and I spent a lot of time in the cafe just chatting to people. It was just the right thing to do, despite the fact that I still didn’t consider myself religious. But I decided that I wasn’t going to let identity get in the way of growth, and how I have since understood it is, my idea of religion was orthodoxy and obedience. I assumed that every organised religion had an orthodoxy, and yet Quakers don’t have a creed…’

How did they feel about the recent revelation made by Maud Grainger at Yearly Meeting in May 2019 that she had only ever been fat-shamed by Quakers? ‘Shocked, but not surprised,’ is their answer, adding, ‘if people are shocked by it and you don’t know that fat-shaming is happening all around us, including within the Society of Friends, that is thin privilege. I hope we are shocked in a way that we do something about it. I think because fatness has been located in a health arena, it’s as if the narratives of fatness are beyond scrutiny and people can say what they like, because the bottom line is “I’m worried about your health”.’

So what would they say to someone who was embarking on a diet, in this new start to a new decade, given much of their writing blasts diets for their over-blown binaries (right-wrong, good-bad) and the fact they separate the body and mind?

‘Saying that diet culture (or diet logic) is oppressive isn’t the same as judging people for finding solace or meaning or belonging, et cetera, through dieting,’ they say. ‘What I would say is, whether you decide to go on a diet or not, your human worth is innate and doesn’t alter. That is the starting point: you are worthy of respect… and [if someone has dieted before and it hasn’t worked] I also want to say to them: your story matters. So take yourself, your emotions and your experience seriously. We’re all eaters and we’ve all got bodies. If you change the food conversation to one of compassion and curiosity, you change everything.’ 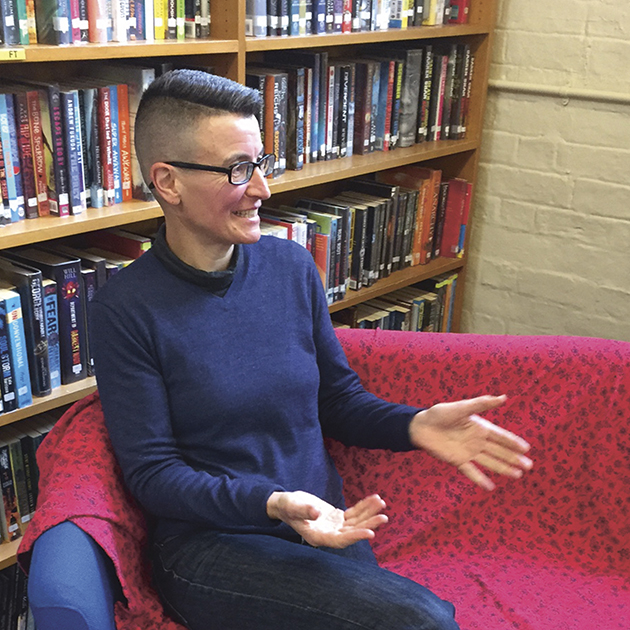