From uprooting inequality to 'Bear necessities'

Quaker support for the Black Lives Matter movement is encouraging, as is the openness to the questions it poses. In response to the conversation about statues of enslavers though, there have been some comments along the lines of ‘at least the Quakers got it right’. I feel that to avoid complacency we need to look more closely.

Quakers were the first denomination to make non-‘ownership’ of people a condition of membership, but this followed decades of prevarication, during which many – including William Penn – ‘owned’ slaves. Anti-slavery leaders, including Harriet Tubman, Sojourner Truth and Sarah Mapps Douglass, were Christians who organised closely with Friends, but didn’t join. Would they have done so if some Meetings had not still practised forms of segregation?

We remember the philanthropy of the Quaker chocolatiers but often forget that they profited from the dynamics of colonialism. Quakers who engaged in heavy industry – most notably the Darbys of Coalbrookdale – catalysed and profited from the climate crisis we are suffering today, which affects people of colour first and worst. Although eventually disowned, the Galtons produced guns used in the brutal ‘triangular trade’.

From the 1920s Quakers campaigned against the colour bar and highlighted the links with colonialism. But the minute books of the time suggest that many white Friends did not believe the experiences of people who suffered discrimination. In the 1930s Woodbrooke hosted anti-colonial leaders from Kenya and India, yet as late as the 1950s I believe the logbook records residents making ‘jokes’ using racial slurs.

At Friends House only one small, basement room is named after a black person – US civil rights leader Bayard Rustin. Meanwhile William Penn and Abraham Darby each have a large airy room named for them. Changing this could help us reflect on which perspectives need listening to today. I don’t raise this to make us feel bad, but to help us reflect on which racially distorted attitudes or actions today we might regret in the future, and to assist us in the effort of uprooting inequality.

Walking briskly along the sea-front, relishing the freshness of morning, the bracing air and vast expanse of opalescent water, I stopped, the better to absorb the scene. Leaning on the railing, I took a slow mental photograph – ‘Such beauty for free’, I mused – and resumed my walk.
Several paces on, a voice in my head said, quite sharply: ‘You have stopped and looked, but you haven’t listened.’ The shock of the rebuke took me back to the railing. I leaned and with eyes closed, listened. The near sounds faded from awareness – the dog-walkers, cyclists, joggers and scooters; sounds of waves slapping the shingle and withdrawing, faded; and then the tones of distant waters pulled by the force of the tide. Gently came an awareness of the Great Deep – for which there are no words. 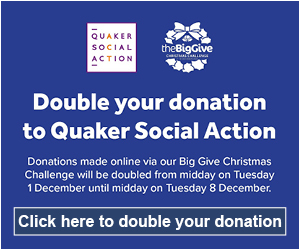